Fancy Figural & Unusual Seal Presses
Lever presses all work in the same manner. The die shaft is held in the open position by a coil or leaf spring. Pushing down on the lever lowers the negative die into contact with the lower positive counter. When pressure is released, the shaft returns to the open position.

American lever presses have been manufactured since the 1840's. The Fraiser press shown is the patent office model from 1843. This press was issued pat no. 3127. This press has a modern lever which was made to replace the missing original. The brass collar is placed over the document at the edge edge of a table or desk. The lower handle is then pulled up to hold the press in place. While holding the lower lever up, you pull up on the upper handle. This lowers the die about 1/4” to make contact with the document. There is no counter, this press may have been intended for use with sealing wax. 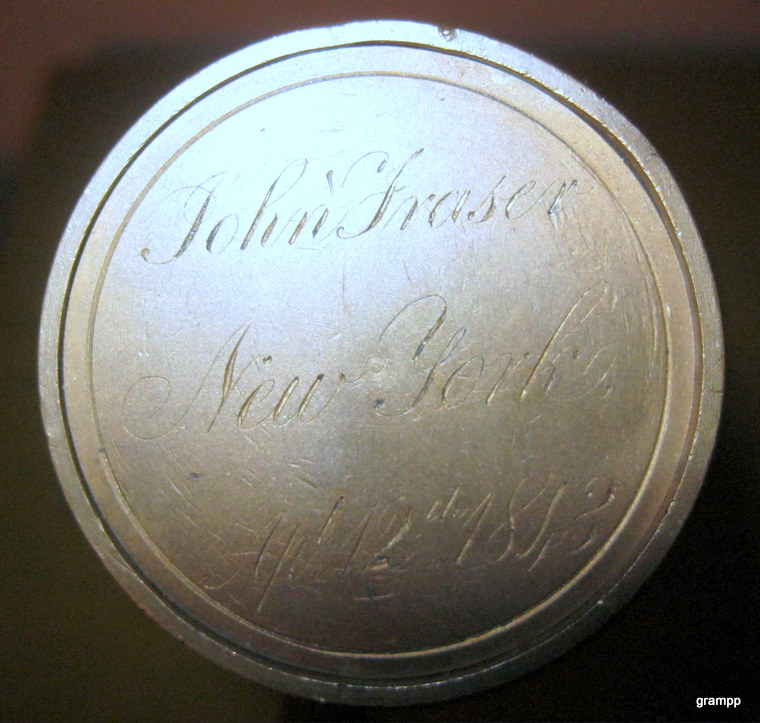 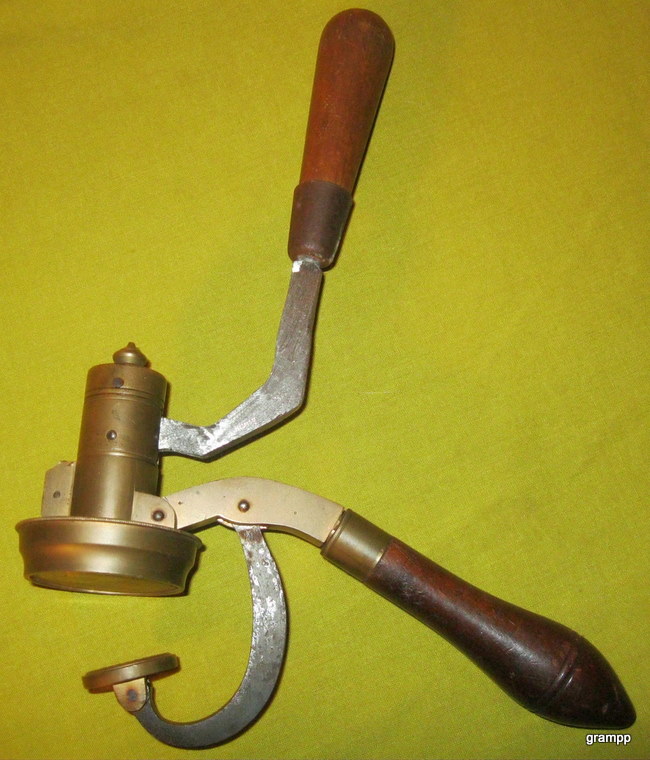 This uncommon European percussion press works much like a trip hammer. Pressing down on the lever raises the die shaft which compresses a heavy coil spring. At the end of the lever stroke a dog is tripped which releases the compressed spring, driving the die plunger downward with great force. 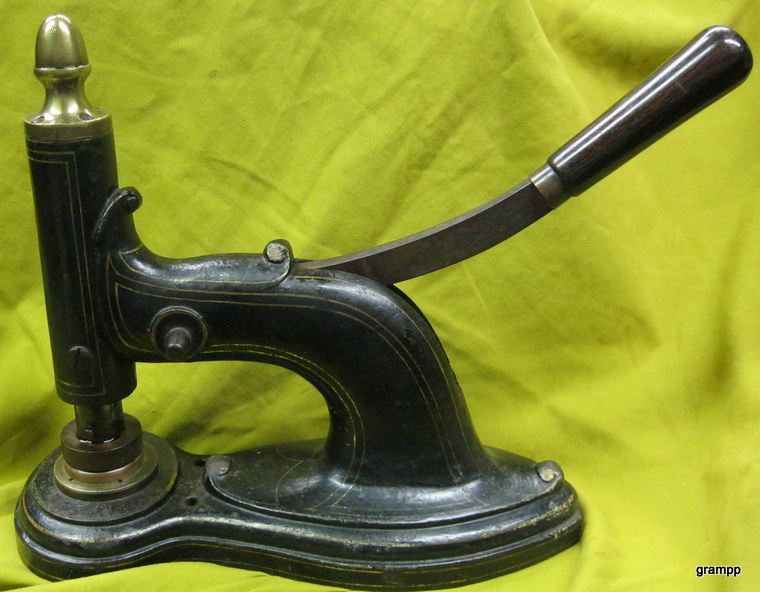 Lever presses, for the most part, have some type of decoration on the body. This may be a painted design popular on smooth or indented body presses from the 1840's through the 1930's, or the ornate figural forms popular in the 1850's through the 1930's. The function was the same, but the size of the press and the degree of ornamentation determined the price of a press. An ornately painted regular body press cost less than half the price of a figural press of the same size.

Most press bodies do not have any manufactures marks. Those that do, command a premium from collectors.
These three presses are representative of styles from the late 1840's to the early 1860's. 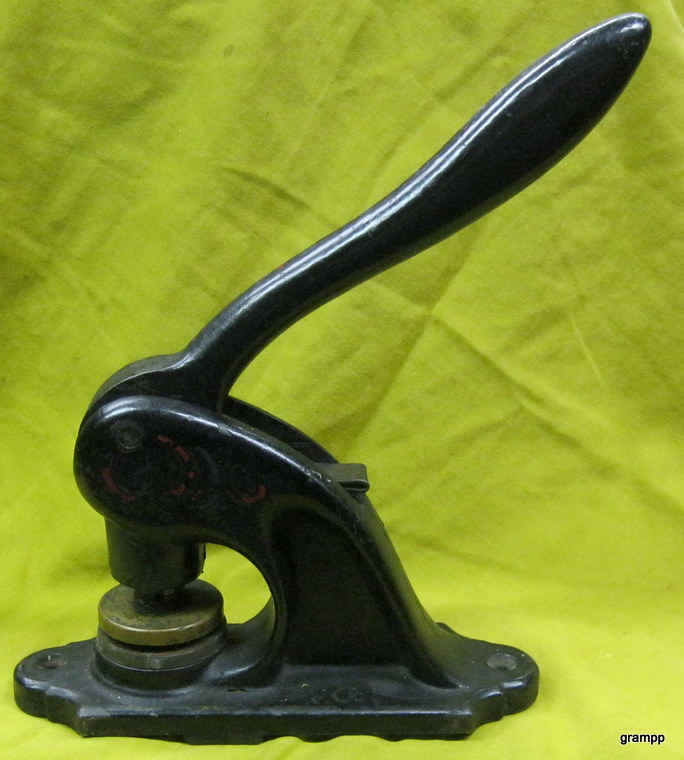 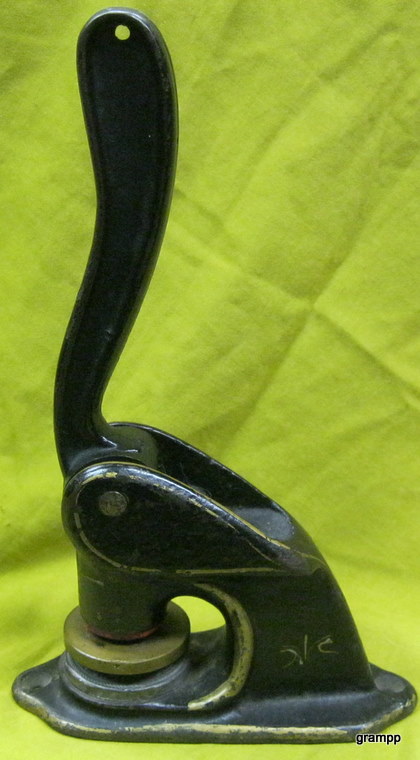 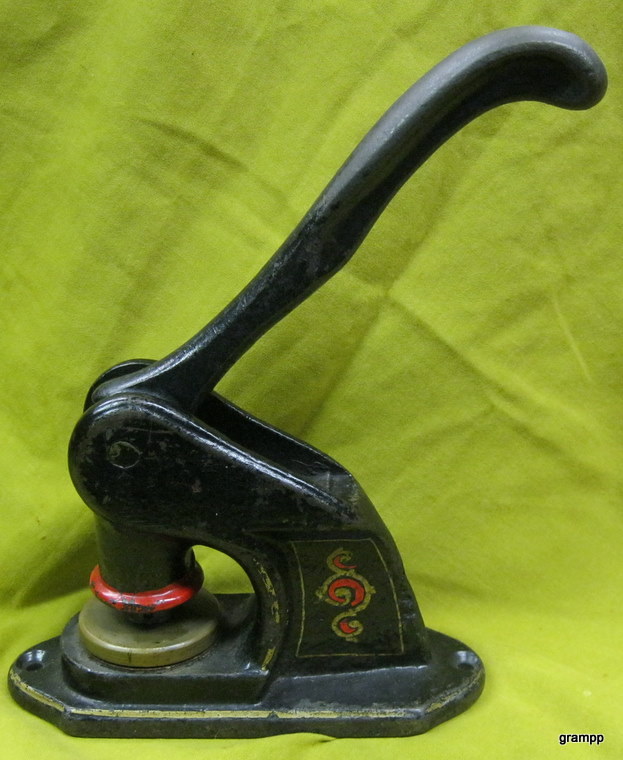 The next photo is an example of a recycled press. The seal currently in the press if from a GAR lodge and dates to the 1880's. The press, circa late 1840's, was designed originally to hold a larger seal, and there is evidence a larger counter was once in place. 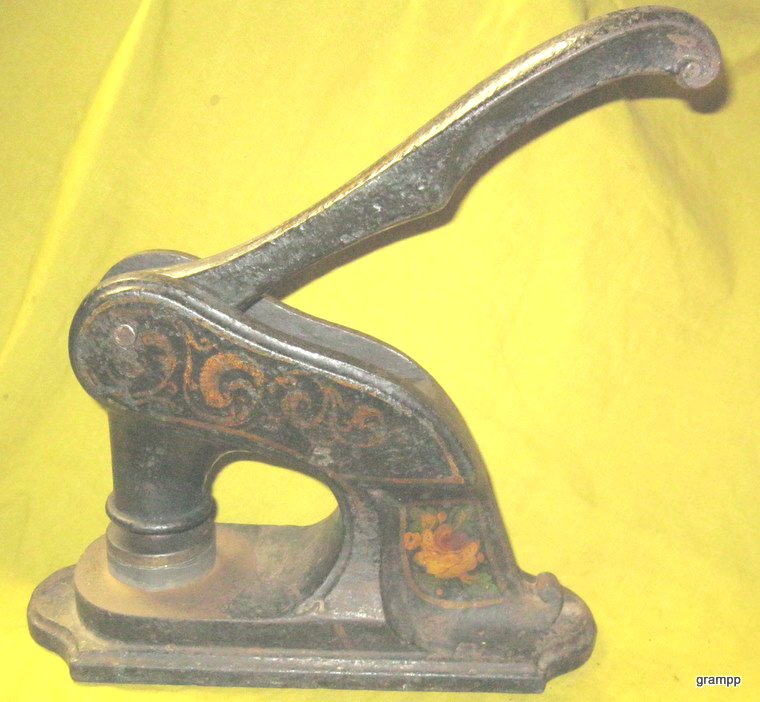 This press is tantalizing. There isn't enough of the stenciling left to accurately determine the maker.

The seal is from an Ohio odd fellows lodge. It is similar to presses used in Europe in the mid 50's. In 2015 while doing research for the new guide book, I was able to determine this press to be a product of Felch and Riches.  Interestingly, this Felch was not the same person who manufactured the percussion press shown earlier. 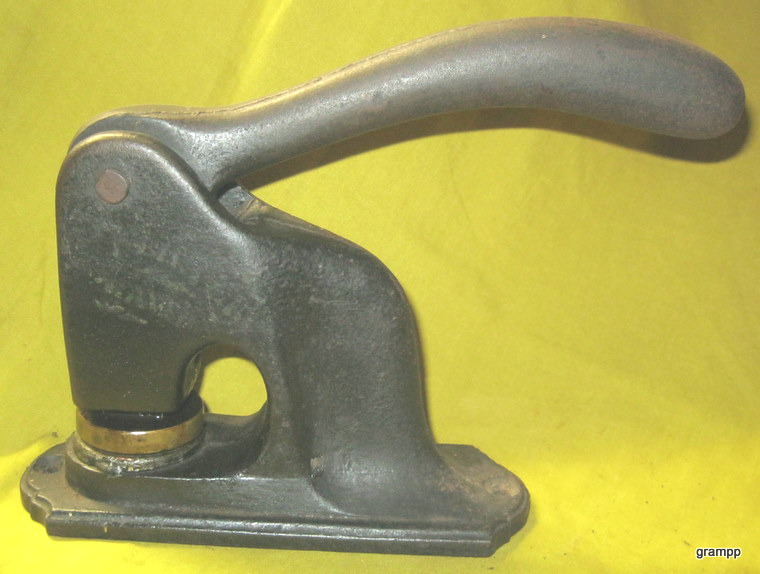 The  next photo shows this press from the back. As you can see, the press does not have the raised backbone shown in later examples of indented body presses. The indented body backbone press was in use from the early 1880's to the 1930's or later.  This example, without a backbone, was manufactured  between 1860 and 1870. 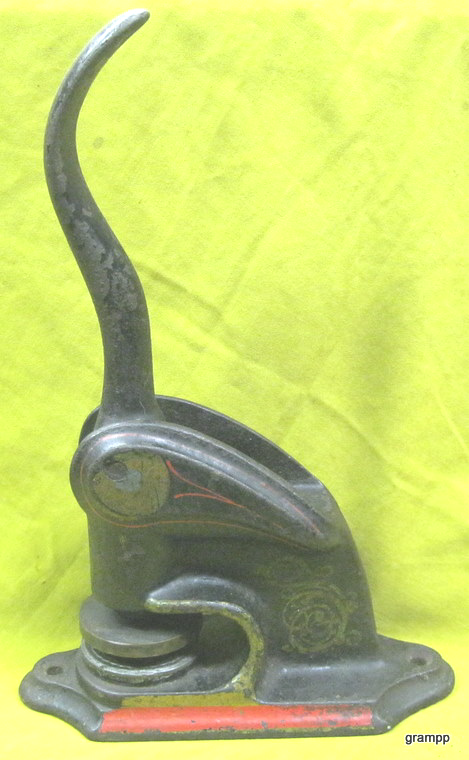 This press has the "backbone" described before the last image.  This feature dates this press to after the mid 1880's.  The style was used in one form or another as long as indented presses were manufactured.

This group of presses dates from the early 1860's to the late 1870's. Notice the similar body styles differentiated by the wide variety of handle styles. The paint decoration also varies widely. 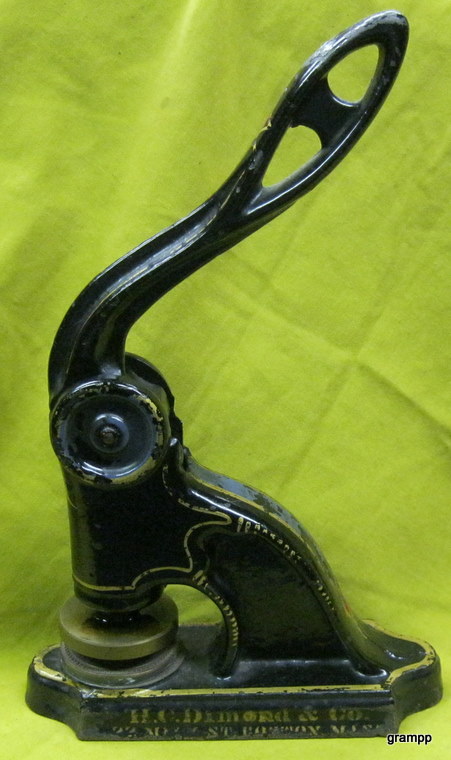 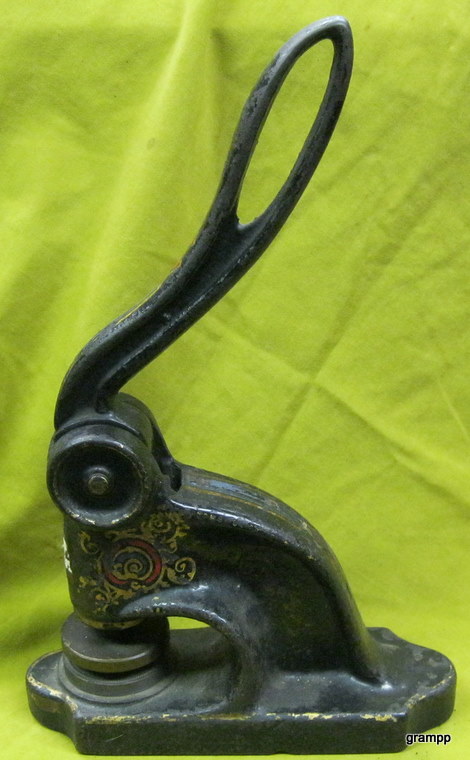 This press from the late 1860's has almost all of the original paint. No. 1 is cast into the side. Other examples of this press are known, but this is the only one with paint. The name stenciled on the front of the body gives this press a non earlier than 1868 date. 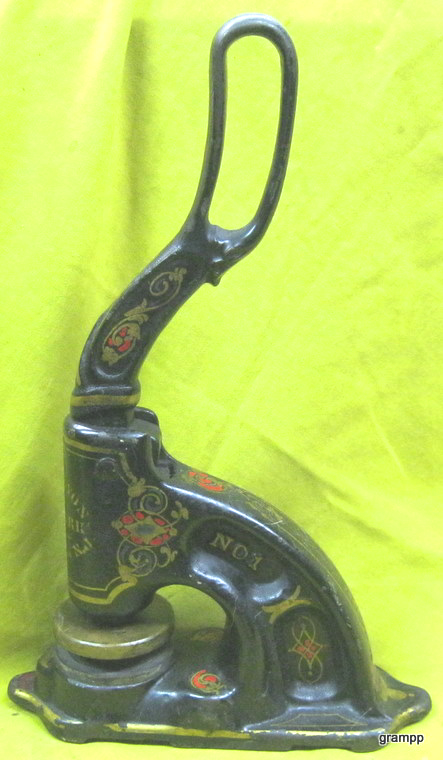 This is another patent example from the 1860's. This press has an upturned nose and screw holes on the sides and back rather than front and back. This press is a modification of the Sargent press, patented in 1864. The idea of the raised nose was to stamp return addresses on envelopes without stamping the back of the envelope. A true example of a Sargent press will be found in the second edition guide book. 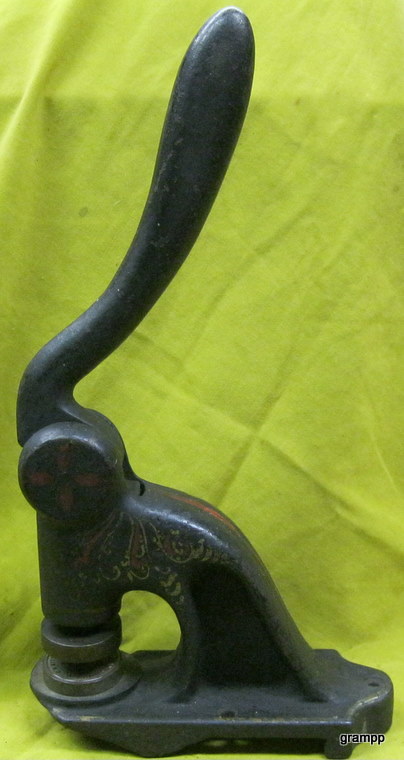 This curl design is somewhat uncommon. This one contains a Canadian seal. The design may be more common in the north. At this time only two examples of this press are known, both have Canadian seals. 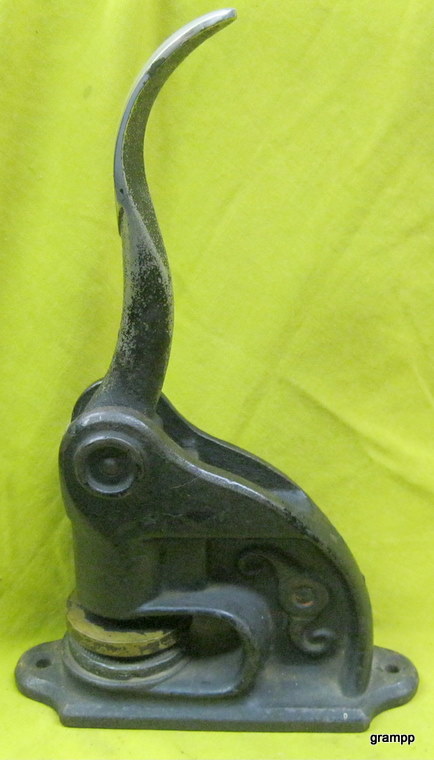 This press is a common variety from the mid 1880's. The press is known in at least five sizes. Most are found with one or two patent dates stenciled on the bottom. The May 8 1883 patent covers the press design. The Oct 9 1883 patent covers the guide pin. This guide pin is used on several other press styles including a curl on neck Lion. The purpose of the guide pin is to keep the die and counter in register. 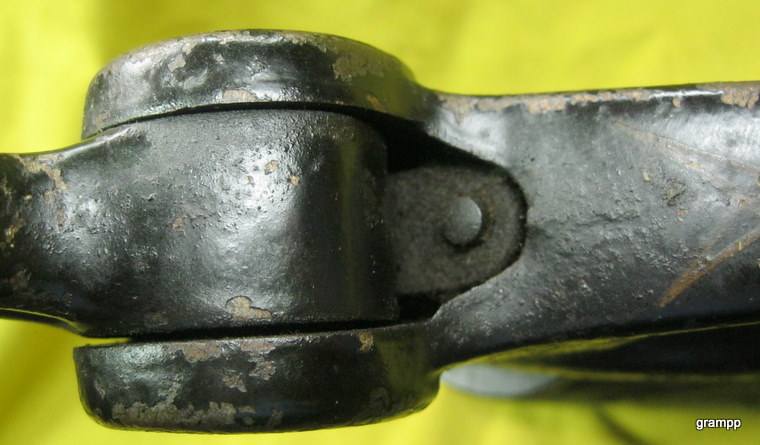 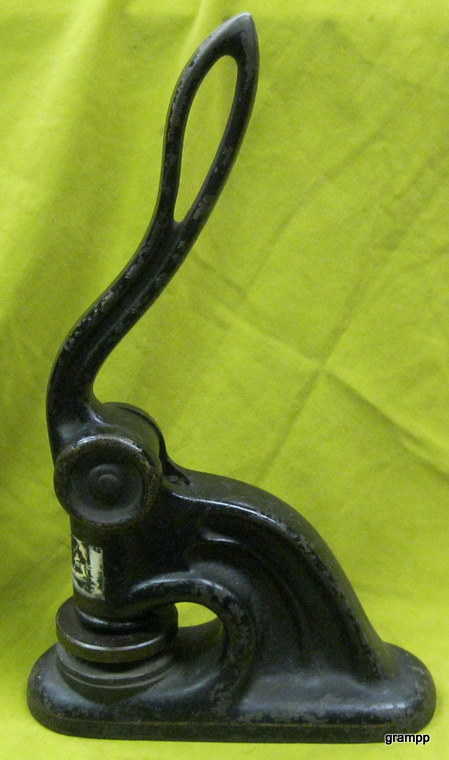 Napoleon's hat is the name given to this unusual press. It was designed so that when screwed to a desk, an imprint could be made by pushing down the lever in the normal manner, or by pulling forward and down. This is the only press I am aware of that has this feature. 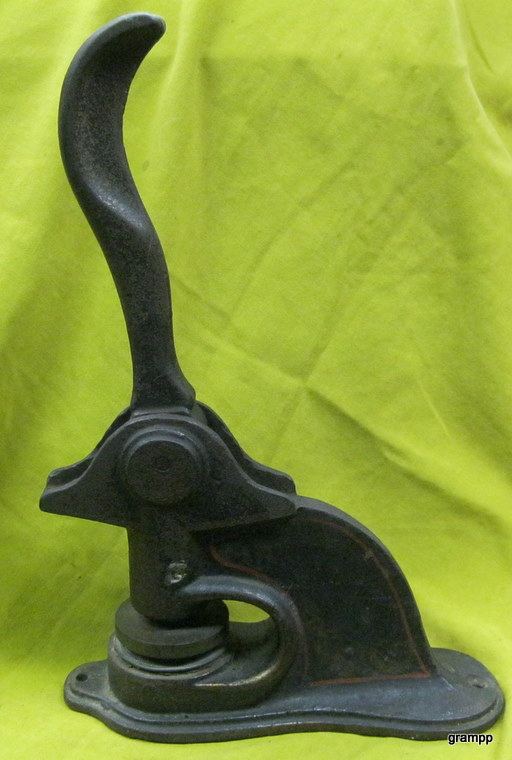 Figural lever presses entered the American market in the 1850's. Some of the first presses were manufactured by C.F. Hall and Platt Evens in Cincinnati.

This large face press was manufactured by C.F. Hall. An image of this press was used on his ads in the late 1850's. Hall also engraved dies used in Evens lever presses. The updated guide book shows this press and and another Hall face press with screws as eyes.  That made it easy to remove the handle and shaft for replacement. 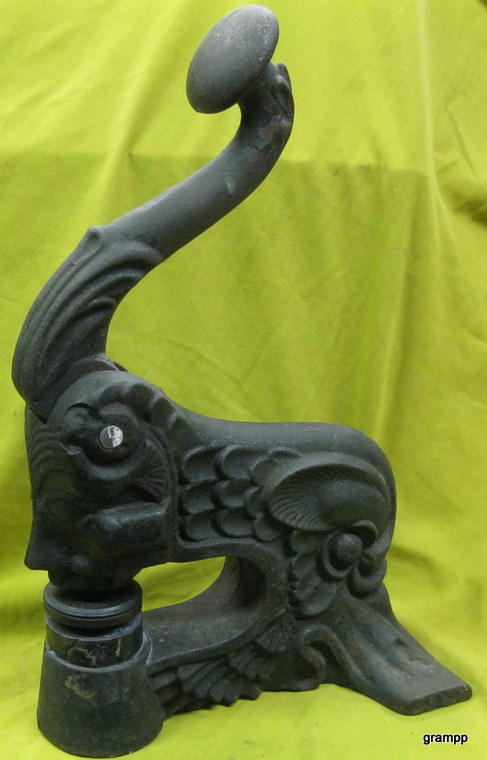 This ornate press may be a Hall product, but the maker is unknown. No examples of this press have been found in vintage ads. The thought now is this press was designed by someone who had worked for Hall and or Evens. The press has design features found on Evens lever presses. 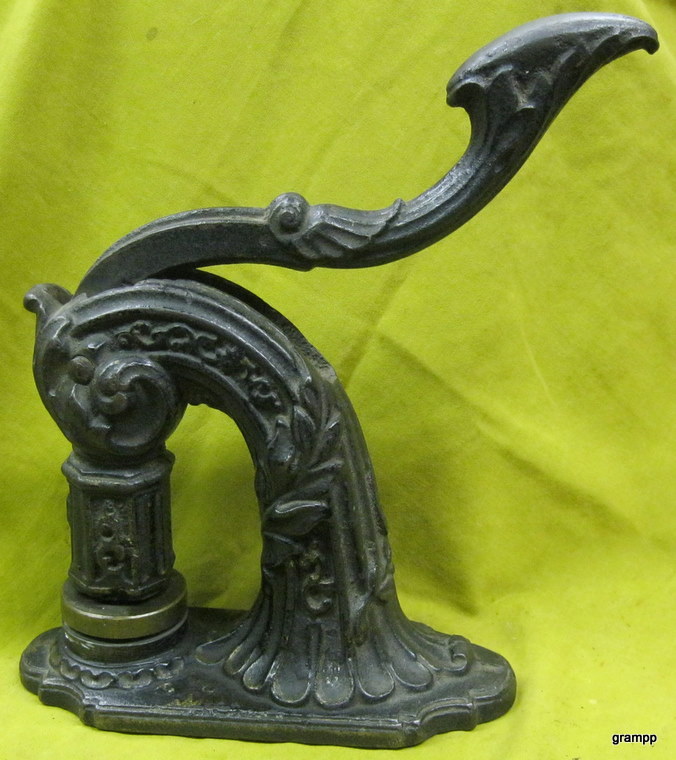 This Eagle press is another example of a recycled body. The seal is from a defunct insurance company.

Research places the seal around 1903. The press body, on the other hand, was likely made for the Centennial celebration held in 1876. The shaft has been re-drilled to accept the current seal. The banner held in the eagles mouth reads National. A second example of this press has been found, also with a re-drilled shaft and replacement seal. 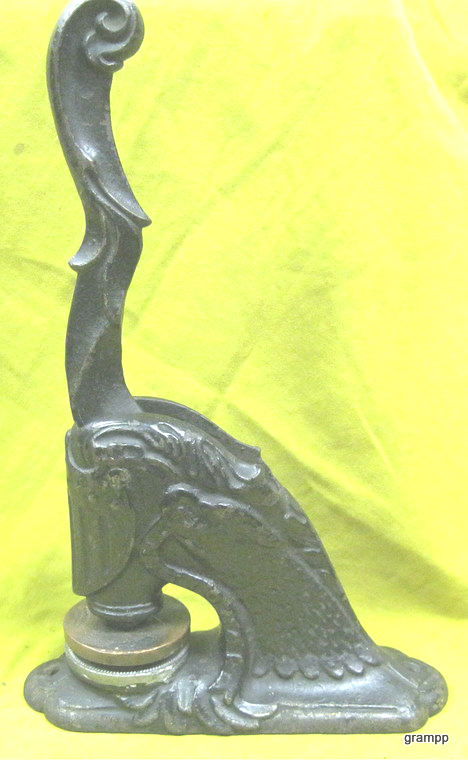